Imagine that you had to garden in a city where pollution, trash, rubble, and a lack of light combined to challenge you at every turn. Then imagine that your garden had no room to expand – not even a few more feet for a border or to add some flowering shrubs and vines. For nearly 22 years, Jon Rowen has accepted these givens in his 25-by-30-foot backyard in the SoHo neighborhood of New York City. But in spite of all this – or perhaps because the space limitations so perfectly fit his meticulous personality – the results are exquisite. 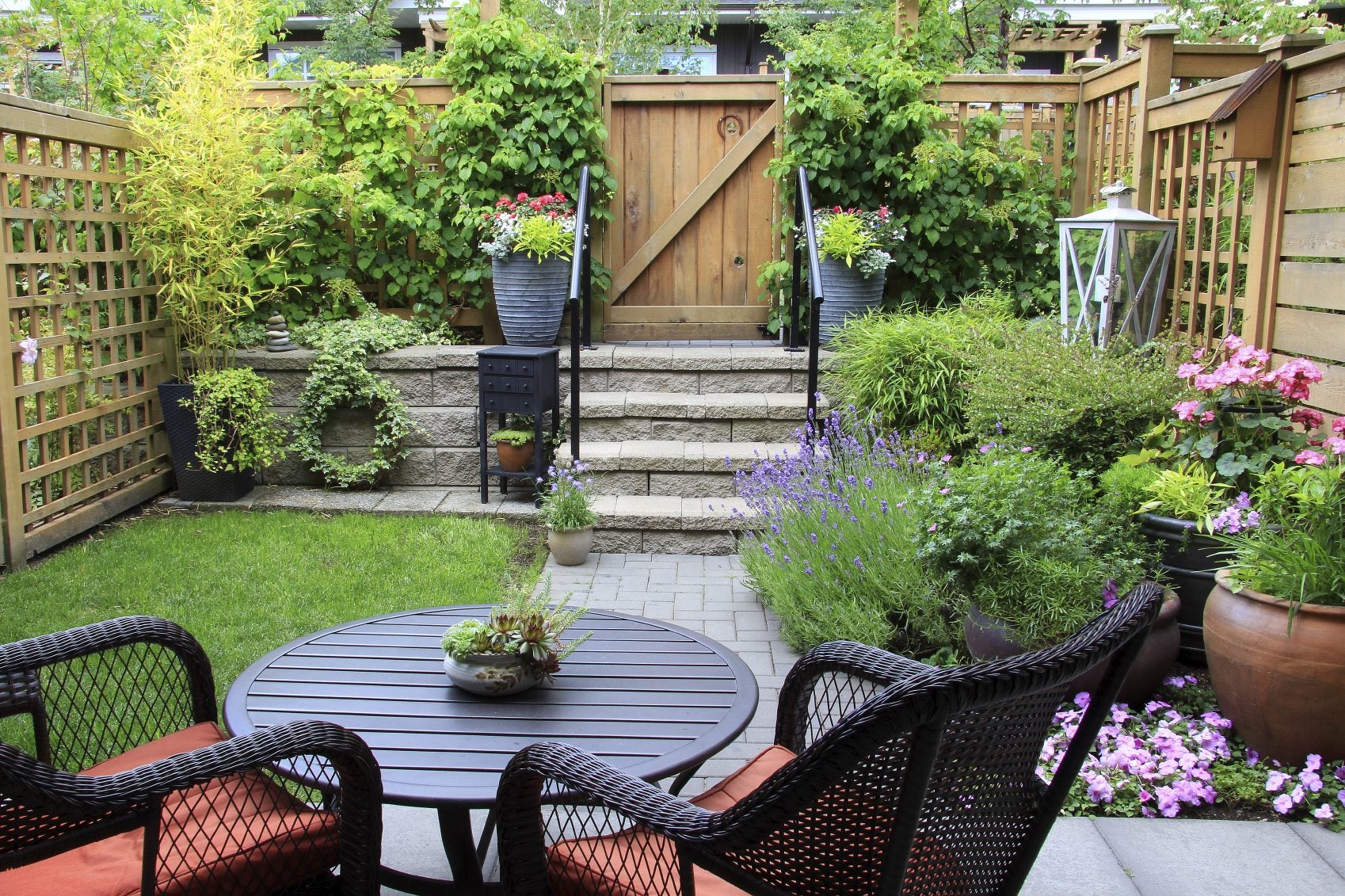 Though Rowen has gardened in the city for nearly half his life, his passion for gardening began when he was a child in suburban New Jersey. His parents’ sunny yard, filled with roses and peonies, is his garden of memory. Even in those days, however, he gravitated toward sheltered places, planting hostas, columbines, and ferns in the small spaces beneath the climbing roses.

Rowen, who recently retired from the Metropolitan Opera chorus, came to New York City in 1970 to study singing. After spending the first year setting up his apartment he turned to the garden. Although there were no woodchucks, deer, or even japanese beetles to contend With, there was a full array of urban scourges – from a former neighbor with 12 dogs that shared the yard, to the vertical confinement of the surrounding buildings that Rowen refers to as “the canyon.” Hundreds of windows stare down from six-story buildings to the east, west, and north, and a four-story, windowless wall shades the garden from the south. But Rowen shrugs off these disadvantages, observing that “it is wonderful to have the seasons at your doorstep – to have a moment to see a beautiful flower or leaf at 6 a.m. when all is silent but the garbage trucks.”

Rowen is methodical in every aspect of his life, including his garden. “Between the ages of 10 and 18,” he says, “I devoured two libraries’ worth of garden books.” Their repeated pronouncements concerning soil structure and plant health proved especially helpful in an urban environment where the stresses are so great. “I liked a book by Montague Free that addressed the city gardener,” he says, referring to the influential author and former head of the Brooklyn Botanic Garden. “He, too, wrote of the importance of starting a garden from the ground up by improving the soil.” But when Rowen approached his own space, he didn’t just have to improve the soil; he had to create it. The “garden” was completely paved.

“It was laid in bluestone,” Rowen explains. “Beneath that were bricks and cinders, and finally, gratefully, clay.” Rowen removed 100 bushels of rubble, with many loud grunts, and carried each one through his small apartment. (There is no direct passage from the garden to the street.) This left a hole 12 feet long, 14 feet wide, and 1 1/2 feet deep that would become the main planting bed.

“After all this work,” says Rowen, “the hole filled with water during a heavy rainstorm, transforming the space into a lake.” In the middle of the lake, a balled-and-burlapped pink-flowering Cornus florida – the first plant he bought for the garden – was marooned. Fortunately, the drainage was fairly good and the water receded. Rowen finally filled the hole with a mix of peat moss, topsoil, and manure (all again dragged through the apartment), and continued his planting. Every year, he hauls in an additional 35 bags of organic mulch. The garden began with three major plants: the pink American dogwood, a Chinese dogwood (Cornus kousa), and a doublefile viburnum (V. plicatum f. tomentosum `Mariesii’). Rowen selected the viburnum both for its flowers and for its ornamental fruits, which are usually stolen by avian bandits before their full effect can be appreciated. The dogwoods were chosen for their showy bracts and fall foliage color. The fact that they are shade-tolerant was also a consideration. The garden receives three hours of direct sun a day, and though that may not seem excessive, it is still enough to wilt or even broil a woodland plant accustomed to cool and humid conditions. The viburnum’s mixed blessing is that, thanks to its extraordinary height, it blocks much of this midday sunlight. “I believed the catalog, which said it would grow to six feet,” Rowen says. (The “shrub” today is 18 feet tall.)

The experience with the viburnum prompted Rowen to venture beyond the advice of books and catalogs, and even to flout the so-called rules. This year, for instance, he has planted six-foot-tall lilies and thalictrums right in the center of the garden. “They say the center must be open”‘ Rowen remarks, “but I thought the tall, slender plants would add an element of drama.”

If there is a theme to the tiny garden, it is, as Rowen puts it, “to learn how to use plants in a small space and make the composition harmonious.” He goes about this with painstaking attention. Sometimes he will mull over what plant to buy for months, or even years. Except, that is, in January, when the catalogs arrive, and “each foot of garden becomes a yard.” One of Rowen’s recent purchases was Hosta ‘Sugar and Cream’. He gave little notice to the catalog description that said it was going to be large – too large, in fact. Once it arrived, he decided to keep the “Fantasia-esque” plant in a container for the season to observe whether he could puzzle it into the tiny garden. He couldn’t. Today, H. `Sugar and Cream’ shares a tub with a clematis, and has become the centerpiece of the “rock garden” – a pile of bluestone remnants that fills the western corner of the yard.

Naturally, hostas are favorites for shaded gardens. They are favorites of Rowen’s as well, so much so that he recently joined the American Hosta Society. “I’m new to the society,” he points out, “but not to hostas.” He met his first hostas at the age of three in his parents’ garden. There, beneath the hemlocks, were the old standbys Hosta undulata `Albomarginata’ and the fragrant autumn lily, H. plantaginea `Grandiflora’.

East meets West in Rowen’s garden where Asian plants such as the hostas share space with American jack-in-the-pulpits (Arisaema triphyllum) and their Japanese cousin, A. sikokianum. “I really enjoy having American plants in my garden,” says Rowen, “and I’m so glad the nurseries are paying more attention to promoting them and selecting forms for cultivation.” There are two native hydrangeas that Rowen particularly esteems: Hydrangea arborescens `Annabelle’ and the oak-leaf hydrangea (H. quercifolia), because they offer more than one season of interest. The flowers of `Annabelle’ start out with attractive green buds among handsome foliage. They form frothy, rounded flower clusters that Rowen allows to stay on the plants for months as they gradually turn into huge green billows. The oak-leaf hydrangea has flowers that start out white, turn pink, then red, then chestnut brown. This hydrangea also sports burgundy fall foliage and attractive exfoliating bark that curls like cinnamon sticks. In a small space, every plant must prove its worth for as long as possible – throughout the season, certainly, and in some cases throughout the year.

The wonderful artistry of the plantings is evident in Rowen’s handling of color and texture, but this doesn’t involve flowers alone. This is a sculptural garden, molded out of foliage. Rowen has collected numerous Tricyrtis species and hybrids, for example, which have incredible flowers, but also have arching stems lined with rows of leaves shaped like angel wings to contribute interest throughout the season. Layers of bergenia foliage contrast with metallic ajuga; variegated Solomon’s seal towers above a host of ferns. Some of the ferns have been brought in for the color of their fronds. Rowen’s favorite is the silver-and-bronze Japanese painted fern (Athyrium niponicum `Pictum’). Plants with golden foliage such as Hosta `Piedmont Gold’, H. `Gold Medallion’, and H. `Kabitan’, a chartreuse Lamium maculatum `Aureum’, and yellow-and-cream-striped Liriope muscari `Variegata’ bring light to the shady garden.

Variegated shrubs are another highlight, including Ilex aquifolium ‘Argenteo-marginata’, Euonymus fortunei ‘Silver Queen’, and, in one slightly sunnier spot, Yucca filamentosa ‘Gold Sword’. More hostas, this time with cream-colored or yellow margins, continue this leitmotif As might be expected, Rowen is always on the lookout for dwarf and miniature plants. New finds include Hydrangea ‘Pink Elf and H. ‘Pia’.

Somehow Rowen always manages to find room for a must-have specimen, occasionally at the expense of a less spectacular resident. The original dogwood at the center of the garden had to go to let in more light and provide some desperately needed planting space. “It’s OK to put in something that will outgrow the area if you can enjoy it for several years,” Rowen maintains. The dogwood was replaced with a handsome urn that, Rowen laughingly points out, cost more than the tree. To avoid botanicide, herbaceous plants that have outgrown their homes are divided and shrubs are lifted and given to friends.

Gardens are projects that never get finished – there are always new acquisitions to be planted and propagated. Usually a garden can expand to accommodate them, but Jon Rowen’s space is so limited that expansion is always a challenge. Testing the new hosta is a good example of his painstaking approach. Rowen practices a kind of Zen in a teacup – delicately fine-tuning his verdant world. Other gardens may be half-empty or half-full; his is always joyfully overflowing.